A Scandal in Bohemia (Petr Kopl)

Strange, eh? The book isn't even out yet. But I am one of the privileged few to see it (thank you, Steve Emecz and Petr Kopl), and I couldn't be happier. The funding of this comic book on Kickstarter has gathered well over thrice the amount aimed at. There's still time left, so it will probably cross four times the required amount. If you haven't booked your copy yet - do so right away here; I have a feeling all places stocking it would put up "sold out" boards within days of its release, and Steve will have to run to the press again to get the reprints out.

Anyhow - back to the matter at hand - the review. I have been wondering for a week now - what can I possibly say about this graphic novel that would do justice to the brilliance of its artwork, the cleverness of its adaptation and the sheer genius of the man behind it? The conclusion - anything I say will be inadequate. Anything anyone ever says will be inadequate - for there are no words in in the languages I know to measure or capture the "superlative" quotient of this book. I could start rattling off in alphabetical order - astounding, bedazzling, charming, delightful, elegant, fantastic, glamorous, humorous, impeccable, jolly, kaleidoscopic, lovely, magnificent, neat, outstanding, perspicacious, quick-witted, radiant, sophisticated, thoughtful, unique, vivid, witty, xtra-ordinary (well, I can't think of another with x), youthful and zany. No, it's not enough. It's not even close. You cannot measure the immeasurable. You can only revel in its glory.

Surprisingly true to the canon (yes, true enough to satisfy even the most rigid of purists), the adaptation captures the spirit of every character so well, you would be drawn into the plot, whether you want to or not. Even if you know the canon by heart, you are in for a surprise - Petr seamlessly weaves two tales into this one (A Scandal in Bohemia and The Adventure of the Speckled Band) - with interesting results. Ingeniously placed cameos by well-known (and well-loved) literary characters as well as original Petr Kopl characters are a delight. Sherlock Holmes is a deadly combination of genius, sassy and adorable, Dr Watson is at his most virtuous and Irene Adler is drop-dead gorgeous (and smart).

I don't speak Czech, so I honestly can't say if anything has been lost in translation. From what I can see, the translators have done an amazing job - the dialogues are witty and amusing, and remarkably true to the canon. When I read the Czech version months ago, it was thanks to Google Translate - a bit tedious, but all right to get the gist - obviously, I missed the clever quips that the English version has now captured. I am very, very impressed. In any case, offers of translations in other languages have started flowing in (and this, before the book is out - can you imagine what it's going to be like when it is actually out?) - so if you speak neither Czech nor English, do not fret. Go ahead and take a look...and then ask Steve if your language is on his list yet.

You can't afford to miss this. Still need more reason? Here are a few:

In the end, at the risk of sounding like a teenage-boy-band, I'll say no matter who you are, what you do or where you're from, "A Scandal in Bohemia" will leave you stunned, impressed and hungering for the next book. I am rubbing my hands in anticipation...are you?

And last, but not the least, I have to thank Ales Kolodrubec, the President of Česká společnost Sherlocka Holmese (the Czech Sherlock Holmes Society), for giving me the opportunity to take a look at Petr's work. Ales, you are a true Sherlockian!

And here's the cover of the book: 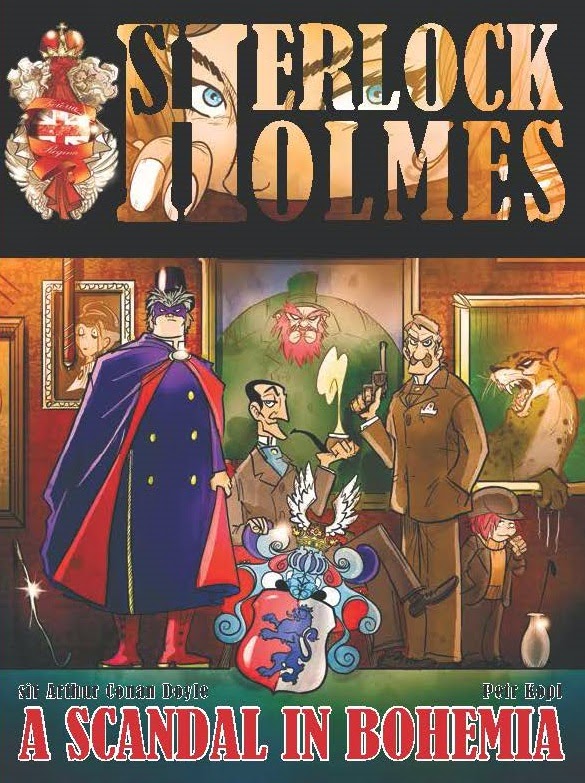