Petr strikes yet again! This time, prepare yourself to be stunned more than ever before! 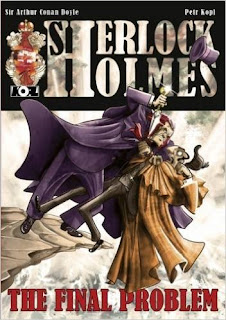 Moriarty is fearsome, and Holmes is stupendous. Watson draws a salute. Mycroft turns up in all his clandestine glory, too. Petr is a True Sherlockian (or a Pucca Holmesian, as we like to call 'em in India) and his adaptation of the canon and canonical characters, even (or especially) with his brilliant quirks thrown in, captures Sherlock's soul in an unparalleled fashion.

To be honest, I have no idea what to say in this review. I have run out of adjectives to praise Petr's work, and this one outshines them all. How do you measure the immeasurable? The art is as (perhaps slightly more) breathtaking as ever. This book is a personal favourite of mine; I had the good fortune of attending the launch of the original Czech version in Prague. 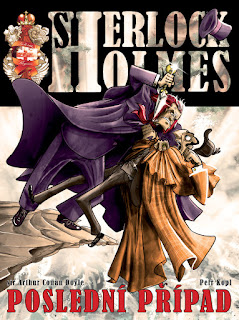 I can safely say that this graphic novel is the BEST piece of art I have held in my hands in my entire life.

Petr had ensured that no Sherlockian/Holmesian will remain dry-eyed by his rendering. 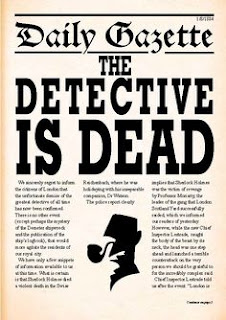 If you already supported the project on Kickstarter, you are a wise Sherlockian, and shall be rewarded soon. (The Kickstarter project was funded in less than 12 hours - must be some sort of a record!) If not, you can still buy it on The Strand or on Amazon.
at July 13, 2015 No comments: